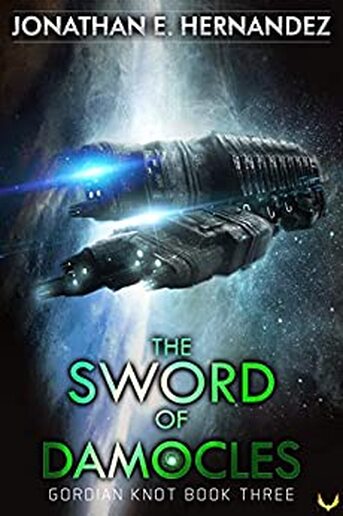 The Galactic War is here...

Pappy and his team join a large military coalition that will travel to Regime space to finally take the fight to the enemy. They have no idea what awaits them, and Pappy’s concerns multiply the closer they get to the Regime's Homeworld.

Speaks-The-Truth feels lost and unbalanced. All of her traumas have led to growing feelings of disillusionment and doubt. She must find a way to regain what she’s lost, and has a pivotal role to play in the Resistance movement of her people.

Tensions and paranoia grow in the capital as the Regime's Queen consolidates her power. Momak seeks the courage to not only defy his queen but to enact a final bold plan which could either save the Regime or doom it.

The artificial gravity on Determination didn’t quite feel right to Pappy.
At a hundred and thirty meters in length, the prototype command ship was still smaller than most transports. The way that the Higgs field polarizer acted on his body—dimensions much smaller than a planet—felt more like an alien force than a familiar one. Invisible elastic bands were constantly holding him to the deck. Then again, it took him years to get used to the rotating sections that most Commonwealth ships used to simulate gravity via centrifugal force. Pappy missed the organic feeling of ground underneath him.
Even with the ship’s inertial dampening system—reverse-engineered from Regime tech—he could tell that the ship had dropped out of wormhole travel. She shuddered as her main engines fired. Pappy heard her reactor howling three decks below in the engineering section.
Pappy dragged himself down a Y-shaped corridor full of scrambling crew members, feeling anxious but in control. They had been drilling rotation after rotation, and he was as ready as he would ever be for their final confrontation with the Regime. The skipper had sounded the alarm for battle stations, and the team had a posting in control thanks to Major Smalls advertising the usefulness of their skills and experience.
As Pappy squeezed through the crowded corridors, he tapped into the ship’s internal monitoring system using his retinal heads up display and TIU—tactical interface unit—to see the main cargo and hangar bay below them through a series of cameras. The techs and maintenance drones barely had enough room to move around and work in. Major Smalls’ seven meter tall Talos mech with its thin waist, chrome-and-white color, and sleek attachments was in a kneeling position to save space. A platoon of the new MK II sentinel tactical drones stood in their recharge racks in standby mode. Pappy glanced disapprovingly over the black-and-gray metal skeletons with plates of additional armor fastened to their torsos.
Pappy blinked and slid to a halt as a team of young-looking RAIDERs in ballistic armor spilled out of the armory backwards. Two of them made sheepish faces as the quartermaster barked at them for improper weapons checking-out protocol. Frankie “Salads” Saladino and Johnny “Pants” Pantoliano. The two cousins were joined at the hip ever since they signed up and joined the RAIDERs. Salads snapped an ankle during drop school and Johnny Pants requested to suspend his training while his battle brother recovered. They got recycled all the way back to first training phase and had to repeat drop school from the beginning.
Pappy smiled at Staff Sergeant “Cad” Cadmos Clerval—one of the RAIDER field staff NCOs. He was a Haitian man with a gymnast’s build and graying hair. He had a laid-back attitude when it came to administrative duties base-side but liked to lead from the front whenever the RAIDERs made a drop.
“Problem, Staff Sergeant?” Pappy asked as he waited for a file of RAIDERs to waddle into ranks.
“Just breaking in some greenies, Pappy.”
Pappy smiled. It made him feel good to have the elite drop unit going with them across a massive wormhole that the Regime called the Bridge. He wished that Determination could have accommodated more than a reinforced platoon on the crowded ship.
“Any news?” Pappy asked.
“Actually, I did hear some E-2s muttering about something called arrowhead.”
Pappy narrowed his eyes and ran his tongue over his teeth. “Arrowhead?”
“Could be a codename for a secret weapon. Or more of the usual fleet rumor BS.”
“Thanks Cad. I’ll catch back up with you soon. Hopefully planetside.” Pappy excused himself and feigned a disappointed look at Salads and Pants as the rest of the RAIDERs marched down the hall. “You two stay out of trouble,” he wagged a finger at them.
“Yes sir,” Salads cawed.
Pappy overheard them whisper behind his back.
Who was that?
You don’t know? That was Pappy.
That was him?