One Day as a Lion: Gordian Knot book 1 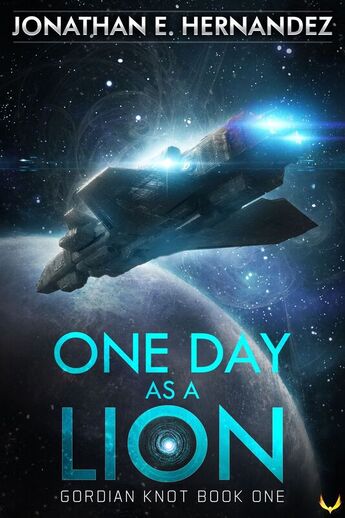 Two civilizations clash. A rebellion grows. The fate of the galaxy hangs in the balance.

Technical Chief "Pappy" Gunther is a grizzled, burning out commando in the United Earth Armed Forces. He ponders a return to civilian life, yet feels a strong sense of belonging to his elite team. When colonists on a far-flung world request aid, a task force from several allied systems is assembled. Pappy and his crack unit are sent to investigate, and to engage a mysterious alien force from beyond.

Talks-To-His-Spear is the warrior caste champion of a matriarchal space empire called the Regime. Leading an army of fanatical, genetically-enhanced super soldiers, he dreams of dying in battle for the glory of his Queen. However, he’s beginning to question the motives of this new campaign, and fears that he may have to compromise his own deep sense of honor in order to fulfill his tasks.

Nobody expected the two alien cultures to have so much in common, and for friendships and alliances to form. Pappy realizes that he can't solve all of his problems through violence as he and his team find a role to play in a rebellion spanning worlds. The growing insurrection, using our back yard as its battleground, threatens to tear the Regime—and the galaxy—apart.

Pappy stared at the short, stocky man in the mirror. He honed in on the face and winced at his laugh lines and crow’s feet.
“Jesus,” he said and self-consciously rubbed his face.
For a man in his thirties, he looked fifty. When he was young, dumb, and eager to leave his armpit town in Iowa, he signed his life away. He gave his best years to the United Earth Armed Forces, and they’d taken their toll.
His reflection stared back with a bird-of-prey stare. Large hooded eyes gazed at him with an edge so sharp they could have cut diamond. He constantly squinted as if a light was in his eyes. His hair, once raven black, was turning salt and pepper.
His thick eyebrows were knitted in worry. He made a mistake by getting in Lieutenant Lodewick’s face and mouthing off in front of a table full of greenies, but he couldn’t help it. He hated bottling up and holding onto the truth as much as he hated fake people. The LT needed to hear that his leadership style was fucked up, and Pappy was never good at mincing words.
Deep inside, he felt like it was his fate to pick fights – even if it meant making more enemies for himself. After the team got back from their next mission, he would have to answer for his insubordination. What was the worst they could do? Restriction to quarters until they got back planetside? Bust him down? It wouldn't have been his first time, but maybe he burned one bridge too many.
He thought about his eight person patrol. Family was a hard thing for him, and relationships. He didn’t know how to open up and be vulnerable. It felt like walking around with a giant open wound. He could make friends easily enough, even if he couldn’t keep them. The patrol was the closest thing that he had to a family, and he couldn’t lose them, but he could never admit that out loud.
He blinked and pulled away from the mirror, putting Lodewick and inevitable punishment out of his mind. One of his joints popped. By the end of the day, they would all make a sound. He couldn’t keep it up. Running around the galaxy and jumping out of shuttles was for the kids. Could he ever get out? Civilian life. He had been in for so long. Went in when he was just a kid. The UEAF was all he knew. What the fuck would he do if he got out?
“Hey man, you done or what?” Staff Sergeant “Gonzo” Gonzales yelled from outside the head.
“Can’t a man take a shit in peace?”
On a crowded transport ship like Expedience, no one was alone. Pappy and Gonzo could have been two pimples on the same ass cheek.
“If it takes you that long to pinch one off you might have a problem,” Gonzo said and slinked into the head, arms crossed with a shit eating grin. He was the special weapons operator in Pappy’s patrol. He could take apart and reassemble the retaliator laser battle rifle blindfolded and then write his name on the side of a bunker with it.
Medium height, stocky build. His head was round with high cheek-bones. Face ruddy brown. A man of quick contrasts. He could go from endearing to menacing in a second. He was loyal, to a fault. A Navajo proverb was tattooed across his fighting hand and an old bracelet, given to him by his dead grandmother, was around his wrist. The only markings on his coveralls besides his name and rank was a patch with their squadron logo, the Manticores. A creature that looked like a lion with a man’s face and a scorpion’s tail held a spear in its front paws. Underneath it was the Squadron’s registration number – 2ROD-F. Military for Second Regiment Operational Detachment-Foxtrot.
Just outside the head, Pappy heard a goat-like cackle. Staff Sergeant Gillian “Gill” Ford, his deputy and demolitions expert.
“He’s getting Nancy on us,” she said with her thick cockney accent. She sounded like a street urchin from an old English drama.
Tall and slim with an athletic build. If she were a dog she would have been a greyhound. Her skin was caramel with mocha freckles and her large eyes were hazel, including her one lazy eye that wandered when she got bored or distracted. Her short, curly brown hair was tied up in a bun, but a curl always stuck out like the tail of a pig. She could sprint like a rabbit, swim like a fish, and moved like a demon through an obstacle course. Zero modesty – uncomfortable only with silence. If Pappy ever got stuck on some shitty rock trying to beat back unstoppable hordes and could only pick one soul in the entire galaxy, she was the one he wanted in that fighting hole with him.
“You done getting dandy, you old posh wanker?” She nailed him in the shoulder with a right cross and yanked him out of the head. There was no use resisting.
This is your family, he thought. “Alright, alright already. Damn Gill, you’re strong…”
Powered by